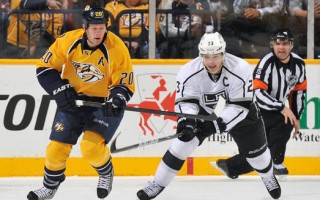 Kings vs Predators NHL Western Conference Online Betting Odds Monday, March 4, 2013 Los Angeles Kings: Champs starting to ramp it up some After a sluggish start to the 2012-13 National Hockey League season, the defending Stanley Cup Champion Los Angeles Kings (10-7-2) are starting to get on a bit of a roll. Winners of seven of their last nine contests, the Kings are just two point[...]

As an increasingly huge part of the Super Bowl betting experience, proposition betting is now largely accepted as a mainstream handicapping optiom at online sportsbooks around the planet. Today we head to the BET365 sports wagering website to get an [...]

Excuse us for picking on the Columbus Blue Jackets early on during the 2013 National Hockey League schedule, but all is fair when it comes to online puck betting. This NHL Western Conference action is slated for 7:00 PM ET on Saturday, January 26, 20[...]

Today we take a look at the alternate point spreads posted at the SportsInteraction online sportsbook for Super Bowl XLVII. This will be our first of many predictions as the Baltimore Ravens get set to meet the San Francisco 49ers on Sunday, February[...]

Bettors Beware: Patriots could struggle with Ravens Although they haven't experienced an overly difficult schedule this season, the Patriots appear to be on a mission ever since they lost 24-23 at home to the Arizona Cardinals during Week 3 NFL acti[...]

Following a 113 day National Hockey League imposed lockout, puck action will return on Saturday, January 13, 2013, with a 13 game opening day schedule. With this post we take a look at the futures betting odds to win the Stanley Cup. The Penguins are[...]